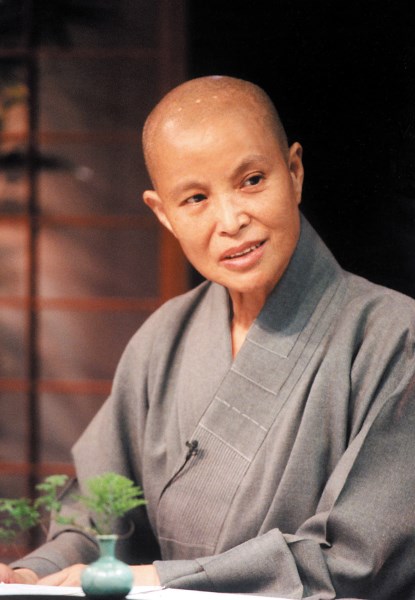 Master Cheng Yen was born in 1937, in Qingshui Township (later upgraded to district in 2010), Taichung County, Taiwan. In February 1963, Master Cheng Yen apprenticed under Venerable Master Yin Shun at the Lin Chi Temple. "Now that you are a Buddhist monastic, remember always to work for Buddhism and for all living beings.” Ven. Yin Shun said, and gave her the Dharma name, Cheng Yen, and the courtesy name Huizhang.

In 1966, the miscarriage in a local clinic acted as a catalyst to prompt Master Cheng Yen to found a charity organization. Shortly after, three Catholic nuns from Stella Maris Ursuline High School visited Dharma Master Cheng Yen, where they had a comparative discussion on their respective religion. Prior to their departure, the nuns inquired, “We have finally understood today that the compassion of Buddha encompasses all sentient beings. But, although the love of Catholics is for all human beings only, we have been building churches, hospitals, and nursing homes for communities. What precisely are the contributions of Buddhism to society?” The Master’s heart sank. Buddhists are active in society, but their charitable engagements are disorganized and concealed. Master decided to organize this scattered charitable force and began by saving lives.

A Hospital Built on Compassion

Starting in 1972, the Tzu Chi Merit Association held two free clinics weekly at Hualien City, servicing people who could not afford medical services. In 1978, Master Cheng Yen had the thought of building a hospital, and with the permission of Ven. Yin Shun in 1979, the thought was put into action.

The fundraising for the hospital was slow at first, as most people remained distant and observed skeptically. The Tzu Chi commissioners, majority of them were regular housewives, launched a series of fundraising efforts: some worked as housekeepers and requested wages in advance; some part-timers donated her entire life savings; and some leprosy patients donate part of their extremely limited monthly meal allowance. “If endeavors have shape, then every inch of the hospital is smeared with people’s endeavors; if endeavors can be forged into bricks, every brick is filled with our endeavors.” Master Cheng Yen sighed.

The Hualien Tzu Chi General Hospital was founded on August 17, 1986. Master Cheng Yen removed the deposit system, which was followed by the Ministry of Health later in December and then  the abolishment of the deposit system applied for hospitals nationwide.

After the founding of the Tzu Chi General Hospital in 1986, Master Cheng Yen discovered that in Taiwan, particularly the eastern region, were in shortage of nursing professionals. She was determined to establish a nursing schoolto not only solve the nursing drought the hospital would eventually face, but to train professional and empathetic nurses. The Tzu Chi College of Nursing founded in 1989 was later restructured to the Tzu Chi University of Science and Technology in 2015. The founding of the nursing college benefitted society in three major aspects: Resolving the education and employment issues of local youths, in particular the aboriginal girls; Locally trained talents can effectively reduce the turnover rate of nursing staff; and, Nursing staff trained in the Tzu Chi humanities can bring professionalism and empathy to all major hospitals, benefiting patients.

Later, Master Cheng Yen founded the Tzu Chi College of Medicine in 1994, which was restructured to the Tzu Chi University in 2000. The principle of the university is to train humane doctors through social and humanities education. Silent mentor program, or commonly known as cadaver donations, was implemented later, turning cadavers into respected educators in medical education.

The “Sutra of Innumerable Meanings” spoke of Buddha’s selfless empathy, "be willing to bestow all to others: your head, your eyes, your marrow, your brain.” Under the request of Taiwan’s medical professionals, Master Cheng Yen asked the medical professionals confirm the safety of bone marrow and stem cell donations. After nine months of evaluation and confirmation, Master Cheng Yen accepted the request. In September 1993, under the recommendation of the Ministry of Health and all major hospitals, the Tzu Chi Foundation founded the bone marrow donor registry, later restructured to be the Buddhist Tzu Chi Stem Cells Center.

Erecting the Model of Medical Humanities

Master Cheng Yen addresses doctors as Great Doctors, the incarnation of living Buddha; and nurses as the incarnation of bodhisattvas. The titles are the anticipation on the Tzu Chi medical team and volunteers to face their patients with the compassion of the Buddha and the tolerance of the bodhisattvas; to save life and inspire hearts. Love from doctors, gratitude from patients, the genuine doctor-patient relationship is hoped to be the ideal model of the medical humanities.